The Immortal Life of Henrietta Lacks named by more than 60 critics as one of the best books of 2010.

The Immortal Life of Henrietta Lacks has been hailed by critics and embraced by readers. In addition to spending over three years on the New York Times bestseller list, The Immortal Life has been selected for over 60 Best of the Year Lists and has won many awards, including the National Academy of Sciences, National Academy of Engineering, and Institute of Medicine’s 2011 Communication Award for Best Book, Chicago Public Library and the Chicago Public Library Foundation 21st Century Award and the Medical Journalists’ Association Open Book Award, General Readership, Non-Fiction.

Rebecca Skloot and members of the Lacks family talk with CBS Sunday Morning about Henrietta Lacks.

Skloot answers frequently asked questions about the book on The Agenda.

Rebecca Skloot discusses The Immortal Life of Henrietta Lacks in an interview with host Terry Gross on NPR’s Fresh Air.

Rebecca Skloot discusses her first encounter with HeLa cells, and her book on Henrietta Lacks, on The Bob Edwards Show.

NPR’s Talk of the Nation

“I could not put the book down . . . The story of modern medicine and bioethics—and, indeed, race relations—is refracted beautifully and movingly.” —ENTERTAINMENT WEEKLY (READ THE FULL REVIEW)

“One of the most graceful and moving nonfiction books I’ve read in a very long time . . . The Immortal Life of Henrietta Lacks . . . floods over you like a narrative dam break, as if someone had managed to distill and purify the more addictive qualities of Erin Brockovich, Midnight in the Garden of Good and Evil and The Andromeda Strain . . . it feels like the book Ms. Skloot was born to write.” —DWIGHT GARNER, NEW YORK TIMES (READ THE FULL REVIEW)

“The Immortal Life of Henrietta Lacks is a triumph of science writing . . . one of the best nonfiction books I have ever read.” —WIRED.COM

“A deftly crafted investigation of a social wrong committed by the medical establishment, as well as the scientific and medical miracles to which it led.” —ERIC ROSTON, WASHINGTON POST (READ THE FULL REVIEW)

“Beautifully crafted . . . Thanks to the author’s narrative skills, it is a tale that one experiences rather than reads.” —SCIENCE MAGAZINE (READ THE FULL REVIEW) 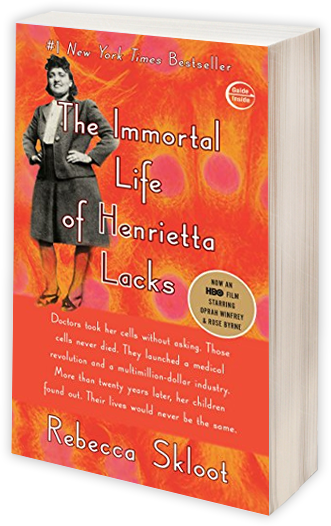 The Henrietta Lacks Foundation strives to provide financial assistance to individuals who have made important contributions to scientific research without their knowledge or consent. LEARN MORE